East West Rail have released their consultation on the Bedford to Cambridge section.

Although their document has a number of options only two of them cover the route from Cambourne to Cambridge.

A separate re-appraisal of a potential route into Cambridge from the North (a preference of the Parish Council) has been given several pages in their detailed route analysis document available on-line.

Their now-preferred route is via a Cambourne North station,,,, going parallel to the A428 and crossing over near Highfields Caldecote and then as an embanked line down between Toft and Comberton (near the layby) past Little Eversden, to the south west of the Royston Lane A603 It goes over A603 with a viaduct before heading to the south of Haslingfield, cutting through Chapel Hill to join the Kings Cross line near Harston.

EWR have released their online consultation rooms where you can see their proposals in more detail. Click here to visit it or here to go to the area near Comberton An especially usefull addition is the online interactive map – choose the Clapham to Eversdens one !

Here’s a short cut View the Clapham Green to The Eversdens interactive map.

In addition there are Geographically based public events. The first public event, or webinar, in your area will give you an overview of the project, the consultation and a summary of the EWR proposals in the named area followed by a question and answer session. The second public event, or webinar, in May might give you greater detail of what most interests local communities in your area such as the environment, cost and the benefits of the project, followed by a question and answer session.

EWR webinars in May

Clapham Green to The Eversdens

Whole of section: Tuesday 11 May, 2pm – 3pm – Please join by following this link.

Focusing on the eastern part of this section: Tuesday 11 May, 7pm – 8pm – Please join by following this link.

Focusing on the western part of this section:  Monday 17 May, 7pm – 8pm – Please join by following this link.

The Eversden Parish council  also hosted ‘mayoral hustings’ on the 7th of April that was focussed on EWR. A YouTube streaming of the 1hour plus event can be seen here

It is hoped that the Parish Council will hold a consultation in May to allow you to voice comments prior to submitting your response.

EWR will be holding weekly, two-hour live chat sessions where members of the public will be able to engage with the EWR Co project team to ask questions. All you need to do is visit any of their virtual consultation rooms and open the chat box function on the screen to chat directly to a member of the East West Rail team. The chat box appears in the bottom corner in a blue speech bubble, as shown below. Please note: Depending on your security permissions, you may need to disable pop ups in order to see and use the tool.

There is a petition to stop all of the EWR project here.

To: Grant Shapps, MP (Secretary of State for Transport)
Cancel the planned East-West railway from Oxford to Cambridge

It has not been initiated by the Parish Council, but a councillor requested it be published on the website.

Comberton Parish Council agreed at its December meeting to set up its own working group and to join forces with Eversden’s EWR working group.

The Group’s campaign is founded on six key assumptions:


If you have any questions about our campaign please read their Campaign news and information click here.

or please email our Working Group via the @ or @

East West Rail (EWR) have announced the Preferred Route Alignment (option E) of this section of the Oxford to Cambridge line, which will link existing stations in Bedford and Cambridge with communities in Cambourne and the area north of Sandy, south of St Neots. Once these options are sufficiently advanced, EWR will present them as part of a second non-statutory consultation, which follows on from the first public consultation in 2019.

The decision by East West Rail (EWR) to focus their attention on option E for the central section of their new railway impacts our area. Coming from a ‘Cambourne Station’ near Caxton the line moves within the area to merge/dual the north bound line into Cambridge (rather than one to the north of the A428 via Cambourne and Northstowe). This permits easier onward journeys to Ipswich/Norwich.

As EWR start detailed work on the potential railway alignments, they say they are doing their best to avoid impacting people in a negative way, and where possible will:-

They produce a rough area of option E

If we zoom in we can see the area to the South of Comberton .  (click on the image for a bigger version)

What do people living and working in the Preferred Route Area need to know?

At present, EWR are still working to develop the precise alignment that the railway will take within the Preferred Route Option. Crucially, before the Route Alignment is chosen, there will be more opportunities for the public to comment on the plans and EWR will continue to use feedback from communities as part of their decision-making process throughout the life of the project.

Their aim is to avoid adverse effects in residential areas and existing communities, and as the project and our design progresses, they will discuss the evolving detail with individual landowners and occupiers directly.

EWR indicated they are considering a cutting south of Haslingfield but not tunnelling, amongst other options and impact on the Mullard Radio Observatory Telescope.

Some residents of villages to the south of the A603, particularly around Haslingfield have set up the Cambridge Approaches Group to provide input to EWR on potential corridors across the Preferred Route area.

Cambridge Approaches Group (CAG) was formed after a meeting on 15th July 2020 between representatives of parish councils in the affected area from Toft to the Shelfords and the intention is to generate their own options for the possible routes of the railway and to discuss these with the community and the powers that be. 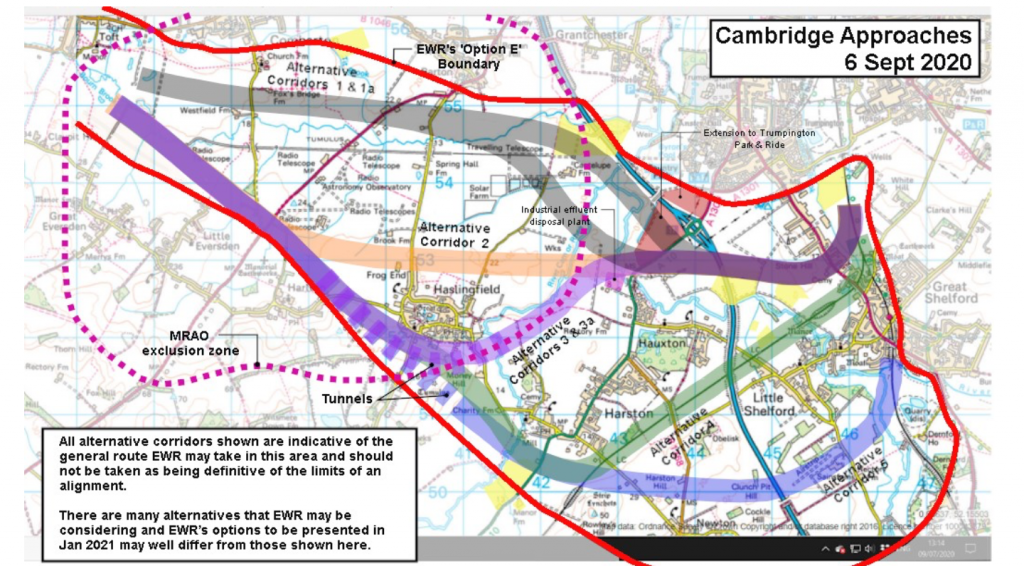 They also showed another, unpublished, corridor option above the A428 which you can see here  (click on the image for a bigger version). 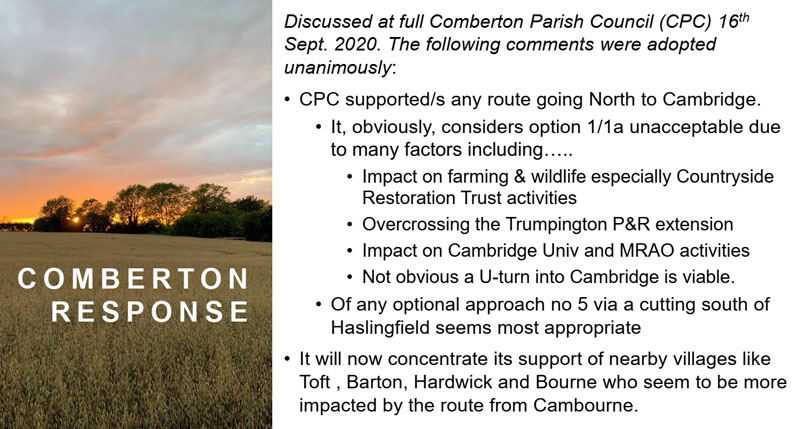 CAG are running Zoom webinars to explain their  findings to interested members of the public and, given the Covid-19 situation, the best way is via webinar. As with the parish council representatives , the routes will be presented by David Revell of Cambridge Approaches who is a civil engineer with extensive experience with railways and a resident of the area.

The schedule of these webinars is as follows:

CAG expect the webinars to last about an hour and there will be opportunities to ask questions.

Please click on the links above to register for the webinar date that you would like to attend (the content will be the same in each webinar).