Comberton is twinned with Le Vaudreuil near Rouen in France.

2019 was the 20th Anniversary of the Comberton <> Le Vaudreuil twinning !

The aims and benefits of twinning are:

The Association welcomes new members; apart from the annual visits, we organise several social events during the year. ,Speaking French is definitely not a requirement. Families with children are particularly welcome.

The last visit from Le Vaudreuil was in Spring 2022 –  in late May . Our return visit is planned for September 2022, to experience the French way of life..

To become involved simply visit the dedicated website for the Comberton Twinning Association to learn about current and forthcoming activities. Email: @" target="_blank" rel="noopener">@

Le Vaudreuil lies some 12 miles south of Rouen in Normandy, France, and thus about 150 miles south of Calais and 80 miles north-west of Paris. Le Vaudreuil is a commune in the Eure department in Haute-Normandie in northern France. It has a population of over 3,500.

The first twinning ceremony took place in Comberton in September 1999 when the Charter (click to see) was signed by Bernard Leroy, the Mayor of Le Vaudreuil and Robert James, the Chairman of the Comberton Parish Council. 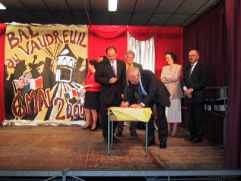 The return visit to Le Vaudreuil 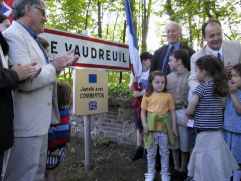 for their twinning ceremony took place during
May  2000 where a twinning sign was unveiled.

Here are some background and pictures of Le Vaudreuil ….

Around 4,000 years BC the first inhabitants settled on the banks and islands of the river Eure to live off the land and protect themselves against potential enemies.

The river Eure, as well as the Seine, became a navigable channel once towpaths were created. Le Vaudreuil is in a strategic location between Rouen and Paris where the two rivers join. During the journey are varied landscapes including forests, plains, chalk cliffs and river locks. The village has always benefited from being at the centre of trading routes.

The current village of Le Vaudreuil is more than 2000 years old and many famous names of British and French history came to ‘stay’. By turns it has been Gallic, Roman, Frankish, Norman, English, and finally French.

Nowadays Le Vaudreuil mixes industrial sites, which still make use of the proximity to the river, with a lively community, proud of its history but building for the future.