Skip to content
Comberton Village Website > Recent Updates > If you have children at home, or are susceptible, you need to read this !

Group A Strep is a common bacteria which causes a range of infections. 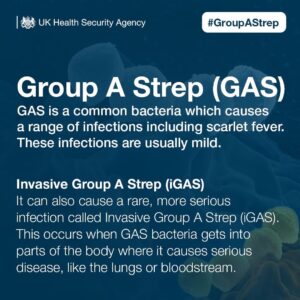 Cases of invasive Group A Strep are rare, but parents should be aware of what to look out for. If you think your child is seriously unwell, call 999 or go to A&E.

Group A streptococcus (GAS), also referred to as Strep A is a common bacterium. Lots of us carry it in our throats and on our skin and it doesn’t always result in illness. However, GAS does cause a number of infections, some mild and some more serious.

The most serious infections linked to GAS come from invasive group A strep, known as iGAS. 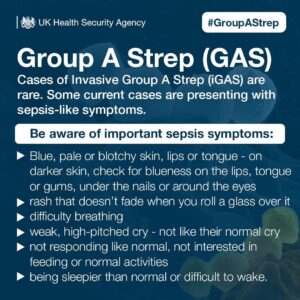 These infections are caused by the bacteria getting into parts of the body where it is not normally found, such as the lungs or bloodstream. In rare cases an iGAS infection can be fatal.

Whilst iGAS infections are still uncommon, there has been an increase in cases this year, particularly in children under 10 and sadly, a small number of deaths.