On Thursday the footpath from the top of Green End to the Wimpole Way and thus to Hardwick was cleared by volunteers. 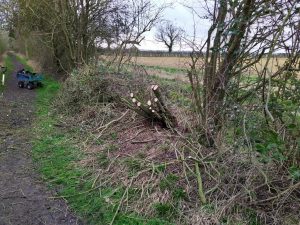 A ‘small’ tree had been brought down across the path following the winds earlier in the week.

Its top was full of brambles which meant it was a prickly task.

A smaller dangerous sapling was cut down to the south.

The blocked path was kindly reported here by a member of the public.