Some pictures for you… taken from Comberton. 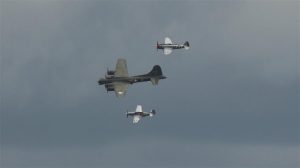 B-17 Flying Fortress G-BEDF Sally B is the last remaining airworthy B-17 in Europe, and we were privileged to see her over Cambridge on Bank Holiday Monday.

She overflew  the Madingley American Cemetery on US Memorial Day to honour the many thousands young men of the US Eighth Air Force who were laid to rest there. 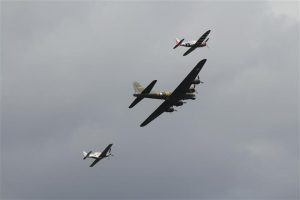 The B17 made  two  circuits over the cemetery at 12:20 to honour the fallen having flown up from the Duxford Airshow. 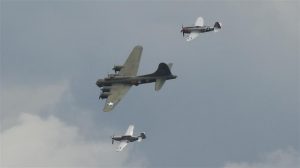 She is based at Imperial War Museum at Duxford.

This  iconic B17 was accompanied by (red nose) Republic P-47D Thunderbolt ‘Nellie’ and TF-51D Mustang ‘Contrary Mary’. They are based at Sywell Aerodrome in Northamptonshire