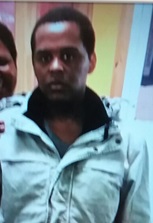 Have you seen this youngster in the village ?

He went missing overnight on Thursday 19th October and his mother thinks he’s somewhere around the village. A police helicopter flew over the village early on Friday morning.

He has learning difficulties and has been out all night. She was asking if anyone sees him to please call the police as she has reported him missing. He’s a young black teenager and when last seen he was wearing a grey anorak/jacket.

He was eventually found and taken to hospital to be checked out.